In commemoration of John Knight, our founder

I was extremely saddened to read this news on 19th January:

“It is with tremendous sadness that I have to report the death of John Knight, former musical director and founder of the HCYB, teacher and friend to many of us. He passed away peacefully at Aldbourne Nursing Home yesterday evening with family by his side.”

John shaped the lives of so many people, and I had nothing but huge respect and admiration for him. I absolutely lived for my Saturday morning rehearsals at Westgate school in Winchester, travelling all the way from Whitehill. I remember feeling rather scared when I moved up to the concert band and was seated right in front of the legendary Mr Knight on 3rd cornet! He was such a perfectionist.

Band was literally my life from age 9-19. There were so many wonderful times, and I made friends who are still my closest friends today. Christmas Eve isn’t Christmas Eve to me until I’ve been to the Buttercross in Winchester and heard the current band playing, and I always see lots of familiar faces, ex Hampshire County Youth Band members and their parents sometimes. We were one big happy family.

I had the privilege of playing carols at Aldbourne Nursing Home on 19th December with a few friends I made as a teenager (one of them who I still call my “big brother”) and John enjoyed singing along – although mentioning how Gladys would have also enjoyed it, which I found heart breaking, having attended her funeral in September. He could still recall names of test pieces and composers and even stood for some photos with us, which meant the world to me. 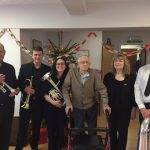 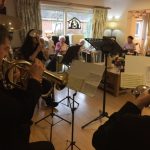 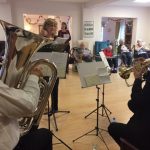 I remember something he said when I was probably about 13/14. He said that music will always be in your bones even if you don’t continue playing…and he was right. I did have a rather long ‘break’ but have been banding again for the past 4 years (almost) and just love it.  Thank you Mr Knight, for your mentoring and bringing so much inspiration and happiness to so many people’s lives. I have memories that I will treasure, always.

John’s funeral has been arranged for family and close friends only but a Memorial Tribute will be held at Winchester Guildhall on Sunday 2nd April 2017. Contact: ray@raybulpit.co.uk or call 01264 352560 for more information.

Otterbourne Brass continue to observe safe practice in line with Covid-19 guidance.Our large, modern rehearsal facility at Otterbourne Village Hall has sufficient space to accommodate social distancing, and masks are worn when not seated for rehearsal.Any enquiries relating to engagements or membership should be addressed to: info@otterbournebrass.org.ukRoger Burke, Chairmanrogerburke2@aol.com07986613837